Equinor and its partner Neptune Energy report this week that they have drilled two successful exploratory wells in the North Sea. Known as the Sigrun East prospect, the greenfield is estimated to hold between 7 and 17 million BOE.

Equinor is touting the field as a “win-win,” emphasizing that its location near existing infrastructure will enable a low-emission development plan. The company said CO2 emissions from oil and gas production on the Norwegian continental shelf is “around half compared to the international average.”

Last month, Equinor announced its goal to curb greenhouse gas emissions from its fields and onshore facilities in Norway by 40% by 2030.

“We have said that we aim to be an industry leader on carbon-efficient production. Sigrun East contributes towards this end. Calculations so far indicate that we will manage to produce the oil with carbon emissions below 8 kg/bbl,” said Nick Ashton, Equinor’s senior vice president for exploration in Norway and the UK.

Two exploration wells were drilled about 11 km south-east of the Gudrun field which has existing facilities that will be used to support the new development. The primary well found oil shows in three zones, in what Equinor described as “moderate-quality sandstone.”

The wells were drilled by North Atlantic Drilling’s (a subsidiary of Seadrill) West Phoenix semisubmersible rig to a vertical depth of 3,810 m and 4,038 m in 109 m of water.

Equinor notes that the two wells were drilled as “sole risk wells” by it and partner Neptune which holds a 25% stake. As the field moves into development mode Equinor will remain operator (36%) along with partners Neptune (25%), OMV (24%), and Repsol (15%). 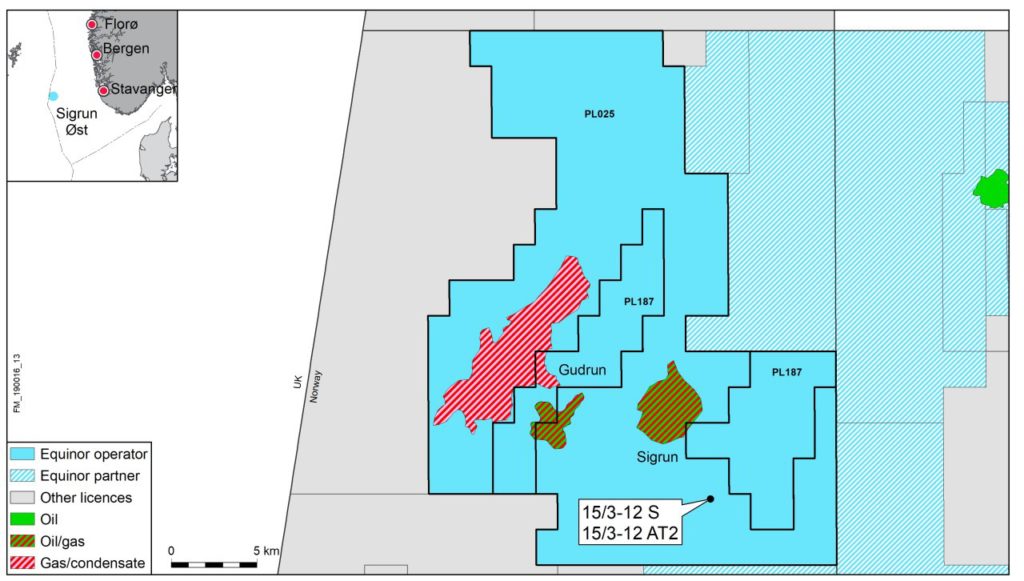 The two new exploratory wells (15/3-12S and 15/3-12AT2) are close enough to the Gudrun field and facilities to be developed as a satellite field with minimal new infrastructure required. Source: Equinor